Major research areas in my lab include:

(2) Sources and transformation of organic matter in riverine, coastal and oceanic environments: A related area of research pursued by my group has been investigating transformations in DOM composition in coastal and oceanic regions. We investigated seasonal and spatial variability of DOM composition in the lower Amazon River, which revealed the influence of variations in the source waters along the lower reach of the river on the composition of DOM exported to the ocean (Seidel et al., 2016a). Farther offshore, at the plume, exudates from phytoplankton (Landa et al., 2014) and bio- and photo-degradation (Seidel et al., 2015) contribute to the dynamics of seasonally-varying biogeochemical provinces in the river plume (Medeiros et al., 2015b). My group has also pursued detail investigations in an estuarine system off Georgia, which revealed that during a severe drought, estuarine DOM can be imprinted with a distinct signature of marsh-derived compounds (Medeiros et al., 2015a; Letourneau and Medeiros, 2019). We also pursued multiple incubations with endogenous microorganisms that demonstrated a clear preference for degradation of compounds associated with marine DOM relative to those of terrestrial origin, which results in an overall shift of the remaining DOM toward a stronger terrigenous signature (Medeiros et al., 2017b). Differences in elemental composition of molecular formulae associated with compounds that are preferentially processed during 24-hour long incubations are consistent with transformations in functional groups, while over longer time scales the differences are likely related to progressive transformations of intermediate products (Medeiros et al., 2017b; Vorobev et al., 2018). Lastly, I investigated the composition of DOM in the deep ocean and showed that, as the DOM is upwelled by large scale circulation, it is transformed by photoreactions, so that it becomes more similar to surface DOM. I also showed that, surprisingly, the influence of photochemistry can extend beyond the photic zone (Medeiros et al., 2015c).

(3) Other research areas: My group has investigated the environmental effects of the oil spilled into the Gulf of Mexico by the Deepwater Horizon event. We identified a large increase in oil-derived compounds in sediments collected in the vicinity of the Macondo well in late Fall of 2010, demonstrating that a significant fraction of the oil introduced to the Gulf settled to the seafloor months after the spill (Babcock-Adams et al., 2017). My lab also investigated the influence of dispersants on the biodegradation of crude oil in deep sea water from the Gulf of Mexico. We have shown that the addition of dispersants led to substantial changes in the degradation of the water-accommodated fraction of oil compounds, in particular of those containing sulfur (Seidel et al., 2016b). Other new lines of research in my group include quantifying export of particulate organic carbon off the Antarctic Peninsula and Greenland meltwater (Castelao et al., 2019). 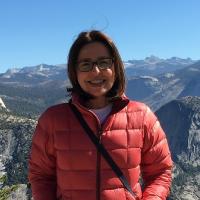